Anamolo is doing Olomana starting from the back of Ahiki- the third peak.  Most people don’t do Olomana this way and it is more difficult and dangerous then starting at peak 1. There is some trail hiking, ridges, rock climbing and lots of ropes.

Directions: This hike starts at Maunawili Demonstration Trail.  It’s in Waimanalo at the end of Waikupanaha Street. There is a small parking area on the right, right by the start.

Go through the gate and and you will come up to this sign: Take the right.

This is the tricky part. We attempted this trail a couple months ago. We got lost in the woods and found every color ribbon possible. Eventually we found pink that lead the trail up and found the trail.

This time we walked about 15 minutes and on the path and pay attention to the woods. We took a left into the woods. The trail was noticeable, but not marked with any ribbons. It just kept going up and there was a section of red dirt. Just keep following the trail. In some areas, its hard to see since this is not a very popular. Eventually the trail started going down and we saw pink ribbons. We didn’t like the idea of going down-knowing we needed to go up. So we made our own path up. Eventually it got steeper and you had to hold on to ferns, grass and trees to go up. There were some stakes to hold onto so someone went this way before.

At the top, it was really clear and was great picture op. Of course we took a selfie. This is our crew! 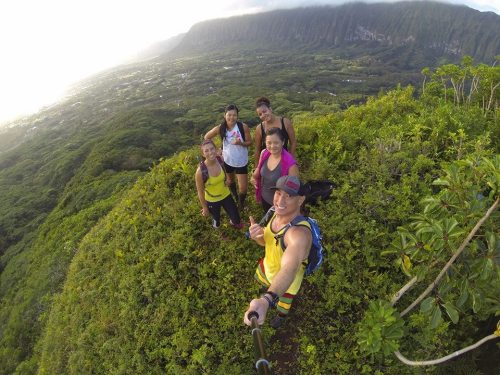 There was a trail and we followed that and it lead to Ahiki. 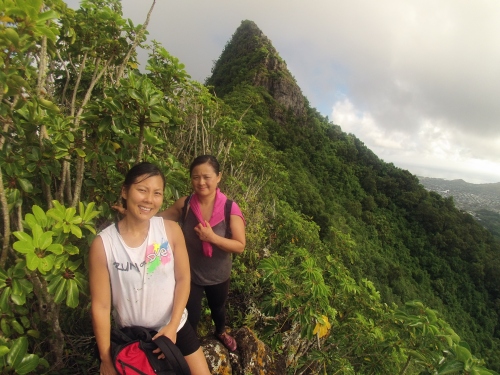 Almost to the bottom of the third peak.

It’s probably about 2 miles before actually reaching Ahiki. It seemed really long and felt like we were hiking forever. I forgot my GoPro head carrier so I have no pics of the base part. The first rock section was the most difficult. It was all about lifting yourself up and trusting the ropes until you found a place for your feet. Thank goodness there was 1 tree growing in the rocks that was able to assist us.

The 2nd part was hard too because of footing. There’s a stake holding the blue rope. Once I got close to that, I grabbed it and just pulled myself up. I think that’s where all my bruises came from.

Here’s Craig taking a break on the cliff…..yep the rest of us passed on that. Great pic, but ummm no thank you!

This is the top of Ahiki: the third peak. Don’t let the pic fool you. The ladder was swinging and it’s a big drop off. Every step I took, it shifted, making it harder to step up to the next step.

We made it to the top and continued on to peak two. The keyhole part is where you can either go through or go round…I go around it…. 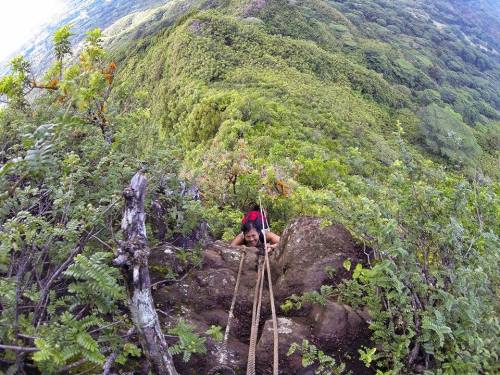 Then we got to the first peak, which is the best for pics.

Me and my hiking bud Rhona. 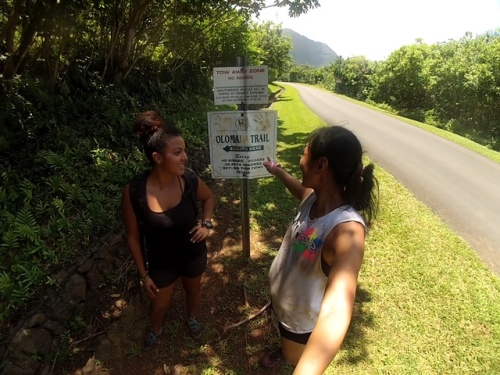 The end for us and the beginning for most others.

Tips: Not kid friendly. This takes a lot of upper body strength. There’s a lot of spots that if you  fell, you would fall to your death. You must trust the ropes and rocks! Rocks are crumbly in some areas. This to me is an advanced hike and Stairway to Heaven an easy hike.  Bring lots of water- about 2-3 liters and go early before it gets too hot. There’s no shade except going up the 3rd and coming down the 1st peak.

Hike at your own risk and know your level. There’s nothing wrong with turning around like we did the first time we attempted it.